More of my writing can be found on my Writing website. My photography is featured on Patrick Dixon Fine Art Photography.

This Blog, originally titled “What Do I Know?” started on a whim. I thought it might be nice to put a few words out there for folks to consider, but like I said, ‘What do I know?’ Eventually that title became too self-deprecating for someone offering his opinions on everything from commercial fishing to photography to writing, to teaching. So I changed it to a title I felt was more in keeping with the subjects I was writing about. Fishing, certainly. Dreams? All I can say is that I’ve had several fishholds full of fishing dreams over the years. Some wild, some sad, some where I’ve woken up laughing. I visit friends there, alive and not, and I usually wake up thinking, “Wow. I should write that down!” So it seemed a natural title, especially when musing on the other meanings the word ‘Dreams’ inspires. A little history about me:

I grew up running about in the cornfields of northern Indiana. My father took me fishing for walleye in the woods of Ontario, and I was hooked on the north woods and wilderness from then on. I moved to Alaska shortly after college, and never looked back. I taught in the winters and commercial fished the waters of Cook Inlet for salmon in the summers for over twenty years. My first writings about fishing were responses to the Exxon Valdez oil spill: Two poems and an article sent me on my way to writing about the maritime life ever since. Middle Rip and Fallout are the poems.

I began my photography career as a high-school yearbook photographer. Years later, I bought my first 35mm camera when I visited Alaska for the first time. In 1979 I found myself in Yosemite, California, immersed in a week-long workshop on photography with none other than Ansel Adams. At the end of that week I finally knew what I wanted to do with my life. Thirty-five years later I am certain it was the right decision. I still love photographing as much as I did in the early days. Today I love the digital darkroom every bit as much as I loved dipping my hands in the fixer. 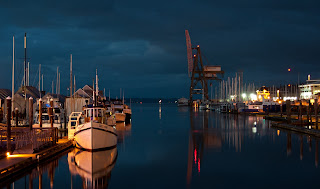 Since moving to Olympia, Washington, I have freelanced in photography and maritime articles for the Washington State Housing Conference (event photography,  the Smithsonian (Fisher Poet Photos), Crowley Maritime (article and photos in Issue 2, 2012, of Crossroads magazine), Pacific Fishing magazine, The Alaska Fisherman’s Journal and others. I have read at the Fisher Poets Gathering in Astoria, Oregon for fifteen years, and have read my poems and essays about commercial fishing and life on the water at venues throughout Alaska and the Pacific Northwest.

My personal writing takes shape mostly in poetry and nonfiction essays. My subject matter is my own experience and observation, and a healthy portion of that is concentrated upon my twenty years commercial salmon fishing in Alaska. Poetically, Clemens Starck, Ted Kooser, Robert Frost and Billy Collins have had an impact upon the way I craft my poems. Several writers from the Fisher Poets Gathering have had the most influence on my prose, including Erin Fristad, a sensitive and perceptive essayist, fisherwoman and Director of the Pt. Townsend campus of Goddard College; Toby Sullivan, an excellent journalist and fisherman out of Kodiak; Alaska; and Moe Bowstern, a wonderful writer/fisherwoman and 'Zine publisher based in Portland, Oregon. We have read together in several venues, and I am always inspired by their writings.

Writing and photography are like fire and water. I love the burning craft of creating a story. I love the flow and mystery of photography equally as much. Hopefully you’ll enjoy them as well as this blog grows. And speaking of you, please add your two cents to the discussions and post comments. It’s always good to know there are a few folks out there who are paying attention!