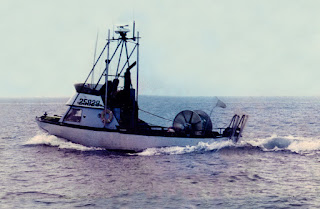 The Skookum Too,  a 32-foot wooden gillnetter, my first boat.

The sky is overcast and dark. Michael is no longer on board, and Danny, my new deckhand passes me a cup of coffee as we head out into the Inlet for a late July fishing day in 1981. The waves are choppy, and I feel the familiar anxiety that I always get when expecting rough weather. As the summer’s salmon run winds down and August looms, the weather becomes less and less friendly on the Inlet.
It's Danny’s first day with me. This has been a particularly rough season, and Michael, my original crew, expressed a desire to leave early if I could find someone else. Danny’s skipper had a girlfriend on board, and he felt like a “third wheel,” so when I offer him the job, he jumps at the chance. We’ve only known each other a year, but we are already friends, and I know he has several more years experience on the Inlet than I. It's only my second year as a skipper, and I know enough to know I still have a lot to learn.
By the period’s opening at 6:00 am we are next to the middle rip off the north end of Kalgin Island. We lay the gear to the west in a light chop. Most of the other boats are stretched out south of us. The tide is running hard, and the most active part of the rip is thick with a huge raft of logs, kelp and sticks. We tow the net to hold it in a hook for northbound fish. It doesn’t take us long to realize there aren't many hits. We're a little too close to the sticks for my blood anyway, so we decide to pick up and move south. Danny takes the boat out of gear and starts picking while I get into my oilskins and boots.
I stand on the hatch covers and pull on my gloves. My eyes follow the white corks of the net as they ride up and down the small waves scooting underneath them. The rip is easy to see, clear on our side, muddy on the other, with whitecaps marking the division between the two. The rip is pulling us toward it quicker that I anticipated. We are seriously closer to it now than when I started getting into my raingear. The orange buoy marking the end of our net is almost among the logs. I step into the picking well at the back of the boat, and Danny stops bringing in the net and ducks under the lines to get on the other side and give me room. It’s standard procedure that the skipper operates the controls in the stern and the deckhand works on the other side of the gear. That way the skipper and deckhand can help each other pick fish, but the skipper is the one in control of the boat.
“I'm going to tow the net away from the rip a little,” I say to Danny. Looking out at the buoy, he agrees it’d be a good idea to get away from the rip. “It's sucking from this side,” he says. “How well does the Skookum tow?”
“Good enough,” I answer, not really knowing and hoping I’m right. 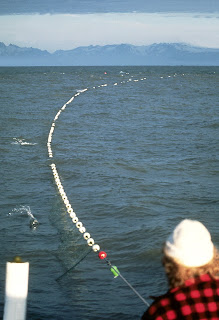 Danny watching fish hit the net from the stern of the Skookum as we tow.
A rip is seen by the color change in the water near the far end of the net.

During the winter of the previous year I had “stripped out” some of the old, torn up gear I had used the previous season. Stripping gear involves taking a razor knife and cutting the knots of twine that hold the gear to the lines. After stripping, the lines are hung with new web for fishing. Since I didn’t know how to hang gear, I contracted Andy, a friend of a friend, to hang three shackles for me. I didn’t realize Andy had always worked for beach fishermen, who fish fixed nets anchored near shore, and don’t ever their tow nets, putting the extreme pressure on the lines like drift fishermen do.  Andy had never hung gear for a drift fisherman. When he happened to spot a frayed spot in my corkline, he cut it out and spliced in a new section with a "butt splice" by simply laying the two ends beside one another and “seizing” them, or wrapping them tightly with twine. He then wrapped the splice with black electrical tape to keep it from catching the web. What he should have done was knot the two lines together so they could withstand serious stress. Instead, the splice he created was never meant to take the stress of towing.

One version of a butt splice. 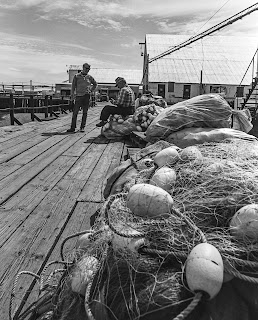 Shackles of gillnet gear stacked along the cannery boardwalk.
In Cook Inlet when I fished there, a boat could only legally fish three shackles,
each one approximately 100 feet long and 20 feet deep.

Half an hour later we are four miles offshore and stop on some streaky water. We set the gear out of the bags slowly, stopping to lace the shackles together as we go. We let it soak a few minutes without seeing a hit, then decide to move on. Danny picks up the net while I call my fishing group on the CB. The strong ebb tide has swept the entire fleet out of sight miles south of us, just barely within radio range. We are the only boat in the upper Inlet that we can see. “Cheryl Lynne, Skookum Too,” I call into the mike. “Pick me up, Thor?”
Thor’s voice is faint and full of radio static as he answers back. “Yeah, go ahead, Pat.”
We exchange information, and to my relief I learn that the fleet isn’t catching much down south. Thor says there's nothing down there to run to. He ends the call by encouraging me, saying, “Maybe they’ll show up there.”
"Yeah, I hope so. Thanks, Thor. Ok, I'm out." is all I can think to say.
Danny finishes picking the set, and we head west to the middle rip once again. The sticks and logs (and my net) have been swept south with the outgoing tide, and the rip is much cleaner and friendlier-looking now. We lay the gear out near it once more.
As we watch the net and drift with the slowing tide, we see an occasional splash on the corkline. Small bunches of fish are hitting the net.  We take a break, have a sandwich and play a half-hearted game of crib, trying to forget the events of the day. An hour-and-a-half later we pull the gear as the fish period comes to a close. To our surprise we discover almost 700 fish in the net! That's one of the biggest sets of the day for the fleet, and my best set of the entire year! We laugh about it and shake our heads all the way home, telling the story to each other again and again. My worst day and my best day of the season have been one and the same.
Posted by Patrick Dixon at 8:58 PM