Here's day thirty's submission for NaPoWriMo (a poem a day for the month of April in honor of National Poetry Month). This is the last day of April, and I've done something I thought was impossible for me – write a poem a day for a month. I wondered at the onset of this project if I had the discipline and the creativity to pull it off, but the people who stuck with me and read the posts (and commented to let me know they were there) helped me expect enough of myself that I showed up to the computer each evening. And the creativity – what to write about and how to write it at least passably well – was a surprise every night. The most valuable piece of that was this jewel I found right here in my pocket: that  my daily life is filled with moments perfect for poems. I think I'm paying way more attention to my daily doings as we drop into May than I was when I stumbled onto April, and that is indeed a gift. Thanks again for joining me. I'll try to continue to post these, if not nightly, at least frequently.

We weren’t all that close growing up,
but our parents were best friends,
so that made us friends by default, I guess.
We played together when we were little,
a few times is all, the two of them and me
while our moms and dads drank cocktails and told jokes.

I grew up first – four years older than him,
six older than her – and in my adolescent wisdom
blamed mom and dad for everything that was wrong.
I cleaned that house thoroughly
throwing out anything my parents liked,
including their friends, and their friends’ children.

It was after my siblings and I scattered from the Indiana corn
like field mice running from fire,
his father died, and mine was available and alone.
He became the good son we never were,
he overlooked the long list of my father’s failings
with a grace I could never touch.

They spent a lot of time fishing together.
Who knows what all they said in that boat floating on a northern lake,
but the words hardened into something solid,
and after dad turned his Cadillac up the last country road,
we became friends again, and he taught me to remember
my father as more light than dark.

At least he used to… until the disease broke
his memories into jumbled rubble.
His sister called today in tears:
they moved him into another home
because his roommate struck him –
who knows what was said in that boat without water?
He didn’t recognize his wife that day,
but he knew his sister.

I have a trip planned: in a few weeks I’ll visit
them their mom, his wife.
I’m not looking forward to it, no, not at all.
but my midwestern roots apparently grew deeper
than I ever expected: my mirror tells me I need to go –
for him, for me, for our dad. Our dad.
I wonder what we’ll say
or if there will even be a boat.
Posted by Patrick Dixon at 11:05 PM 1 comment:

Here's day twenty-eight's: submission for NaPoWriMo (a poem a day for the month of April in honor of National Poetry Month)

You stick out your tongue
smiling, wag it in and out.
“Blablablablab,” you say,
and I answer, “lahbahlabahlabah.”

We collapse into laughter
for a breath until you purse your lips
“Pftftfbtttt!” And I’m right there with you,
motoring my lips until they connect
with the side of your neck
as I lift you from my lap.

You arch your back and squeal
and I am filled with delight.
You point at me and pinch your lips tight:
“MMMMMmmmmmmmmm.”
I nod. This is indeed delicious.
Posted by Patrick Dixon at 10:34 PM No comments:

Here's day twenty-six's: submission for NaPoWriMo (a poem a day for the month of April in honor of National Poetry Month):

What a deceptive phrase.
Under which weather?
Sunny? Rainy? Windy?
Under the fog we had this morning?
And why ‘under’ it?
Wouldn’t it make more sense
to be ‘within’ bad weather?
Or ‘caught up’ in the crappy climate?

It would be easy to write
a depressing poem tonight,
as the cold, flu, or whatever
this is reaches into my mouth
with long, ragged fingernails
and rakes the back of my throat.

It is joined by a compatriot,
who clamps off my sinuses
with slow-turning vice-grips in one hand,
while the other pounds a hammer on my temples.
“Shut the door, you guys!” I cry in vain
as chills race down my spine.
But the wind continues its low whistle
as they turn their attention
to stretch each joint and muscle
until even my skin aches.

I could write about the failings
of the body, this temporal curse,
that never is as dependable
as we’d like to make it seem.
Or the fragility of any current state of being –
health or love or depression: how change
is the only constant. this too shall pass.

But I’m feeling sick tonight.
And I’m just not up to it.
Posted by Patrick Dixon at 8:56 PM No comments:

Here's day twenty-five's: submission for NaPoWriMo (a poem a day for the month of April in honor of National Poetry Month):

These days I frequently cast my net
over my northern Indiana hometown,
fishing for childhood memories
that swam away, into the dark water
of hidden coves, deep eddies
far from the shadows that stalked
the water’s surface during my adolescence.

I was a fingerling when I left that pond
and spent too much of my time afterward
swimming upstream
against currents that were more than willing
to throw me at the nearest rock in the river.
It wasn’t pretty.

I eventually reached salt water
on the deck of a boat bound
to catch fish, and had to take a hard look
at this swimmer in the mirror –
face the fears I would confront
about really being at sea.

Dozens of hands
tossed me tow lines when I lost power,
or helped me get started again;

a few even secured me to the dock
so I could float up and down
with the ebb and the flow,
and not drift away again;

where I finally feel safe enough
to take a small skiff onto the water
and toss a net in a secret cove,
hoping to snag one that’s
not too big.
Posted by Patrick Dixon at 10:22 PM No comments:

Here's day twenty-four's: submission for NaPoWriMo (a poem a day for the month of April in honor of National Poetry Month): 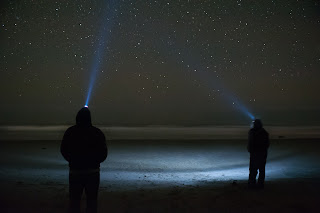 Clock’s tickin’.
Can’t you hear your heart beat?
Count your breaths for the next minute:
how many?

What are you doing right now?

If those breaths quit
on the next one,
would you be glad you stopped
right then?
Would it be okay?
Or would you say,
“Shit. If only I’d known.”

Because we don’t.
Know.
None of us.

We guess at our odds,
plan for more
than we ever get.

But I wouldn’t want to go out
playing video games.

I’d rather I was lying next to you
your arm draped over me
your eyes locked on mine.
Posted by Patrick Dixon at 9:11 PM No comments: