By the early 1950’s fish traps had become a controversial political issue. The traps, controlled mostly by canneries that were owned by non-Alaskan interests, became a political symbol for the corporate colonialization of Alaska. Playing on the mythology of the hard-working individual versus the big company taking advantage of the everyday Alaskan, abolishing fish traps became the driving issue for the territorial legislature. The legislature was composed of individuals who believed that the canneries were controlling too much of Alaska’s natural resources. Many of the new lawmakers were themselves fishermen. The first act of the new state congress in 1959 was to ban all fish traps from Alaskan waters. 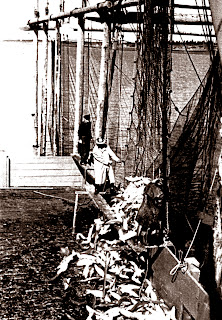 The spiller of a fish trap is emptied at low tide, circa 1940. The fish are spilled
out of the trap’s holding nets onto the deck of a barge that will deliver them to the cannery.
Photo courtesy of Nick Leman

Alaskans pride themselves on their staunch individualism. Many men and women came to the territory because it was a way of “striking out on their own,” of being different. One such strong individual who ended up fishing the shores of Cook Inlet was Jack Lewis. In fact, he took his beliefs far enough to elevate him as a folk hero in the eyes of many locals:

As Gruening predicted, Libby’s lawyers weren’t long in getting in touch. They told him it would take $8,000 to win the case in court. They offered him $10,000. Jack agreed, signed a Quitclaim deed against the trap, and the lawyers went away happy. In the following spring of 1959 Alaska indeed became a state, and fish traps throughout the state were outlawed. Libby never fished Jack’s trap (and Jack never fished Libby’s trap) again.

-as recounted by Moon Mullin and Nick Leman, 1999. 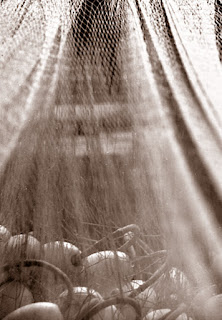 A modern gillnet hangs on a net rack waiting to be mended. Styrofoam corks
are threaded and tied to the corkline to provide buoyancy for the net as it
hangs in the water. Before the use of styrofoam, wooden corks, then plastic
ones were used. Alaskans still occasionally find glass balls used by the
Japanese fishing fleet for their gillnet floats washed up on shore.
Photo by Patrick Dixon
Posted by Patrick Dixon at 4:40 PM