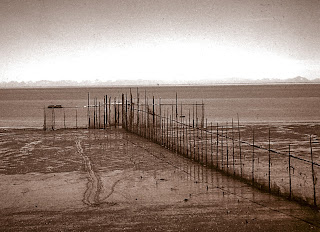 "Hand" traps like this one were constructed by driving metal
stakes into the mud, then spiking or stapling spruce poles to the stakes.

The top of the trap was still well out of the water. Near it, 18 inches below the tops of the poles, smaller stabilizing poles called “ribbons” or “capping” had been nailed and lashed horizontally the length of the trap. A barrier of chicken wire was nailed to the poles when the trap was built at the beginning of the season, starting from the capping at high tide and lowered to the bottom when the tide was out, forming a “lead” or fence between the poles.  This lead directed the salmon swimming near shore toward the heart of the trap where they were penned in a rectangular area called a “pot” and eventually brailed out by hand and hauled by skiff to the scow for eventual pickup by the cannery tender.
Chests pounding from the close call, Nick and Bob sat on the capping above the pot and surveyed their situation. They couldn’t stay where they were, for the incoming tide would soon be high enough to wash over them. If there was a storm behind this swell, the situation could become worse yet as the waves built: on a big tide like this one they could be knocked off the trap into a turbulent sea. The Westward wasn’t due on her supply run until later tomorrow. They were a long distance from shore, and there was no one there that they could yell to for help anyway. The shores of Cook Inlet were sparsely populated. Although federal regulations dictated the distance between traps to be at least one-half mile, the nearest trap was one and one-half miles to the south. The dory, still floating, was capsized and useless. No help was available. They needed to do something quickly.
They decided to scoot along the capping toward shore as fast as they could. They scooted along in a sitting position, pulling themselves around a pole every twelve feet, then back down again to scoot some more. The process seemed to take forever. They had to work themselves around more than 90 poles. By the time they neared shore, the water was lifting them up and threatening to wash them away. Their boots filled with water, and the extra weight was a hazard if they were to slip off the trap. They decided to remove one boot at a time after they passed a pole, shoving it upside-down onto the top of the narrow pole. In that way they could ensure their only boots would survive the ordeal, though they were beginning to wonder at their own chances. As they slowly neared shore, wet, cold and tired, they joked about how sore their butts were going to be the following day.
Finally they reached the end of the trap. Unfortunately it stopped 60 feet from the beach, where the water was still seven feet deep. The waves seemed enormous as they rose up and broke between the trap and shore. Close to safety, they now had to pass the most dangerous test of all.
“You better jump!” Bob shouted to Nick, knowing he couldn’t swim. “I’ll be right behind you!”
Nick nodded and leapt into the cold water. As he hit, an incoming wave picked him up and threw him toward the beach. When the wave receded, he found himself standing upright, with Bob at his side. Exhausted but alive, the two cousins could only shake their heads and smile at their good fortune.
They were alive but not finished with their adventure. The high tide now nearly reached the bluff, and a jutting point blocked their way to their cabin a half mile away.  They realized they would have to wait at least two hours for the tide to drop before they could get around the point.  Soaking wet and shaking, they were losing body heat fast.  In the dim Alaskan summer night they dug shallow depressions in the eroded sandstone at the base of the bluff with their bare hands. They then buried themselves in the sand to stay warm.
The sand insulated them with what little body heat they had left, and they shivered and joked as the tide slowed and turned. The sky brightened with the coming sunrise, and they dug themselves out and slogged to the cabin. After a change of clothes and a hot meal, they walked out at low tide to resume work on the trap, this time wearing shoes.
On the Westward, a concerned Gene Mason recovered their skiff and two of the pipes still lashed to it five miles south of the Waterfall trap. Thinking the worst, he headed toward the Waterfall trap at full speed. He was delighted to find the two young men alive and well when he arrived. Nick and Bob recovered the other two pipes off the mud of the inlet where they had sunk after rolling off the skiff. They used the dingy to recover their boots after the tide came in. NIck continued to trap fish until it was banned in 1959, then turned to set netting for the remainder of his career as a fisherman. 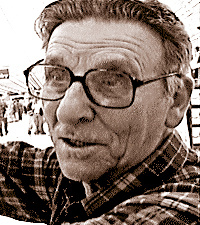 - Thanks to Nick's son, the Hon. Loren Leman for help with details of this post.
Posted by Patrick Dixon at 9:42 AM