Trapped on a Fish Trap, Part One

Just north of the island of Kodiak the Gulf of Alaska opens to Cook Inlet, an inverted-funnel shaped body of water that leads to Anchorage and beyond, splitting into shallow, narrower arms as it reaches the end of its passage. A few red salmon make the entire transit north beyond Anchorage to the Susitna river system, but the bulk of the Cook Inlet sockeye run, numbering well into the millions, are bound for the Kenai river on the east side of Cook Inlet nearly halfway to Anchorage.
In the years before the Alaskan drift gillnet fleet discovered Cook Inlet, the bulk of fishing was done from shore, using fish traps constructed anew each year with wooden poles set in rows that stretched hundreds of yards into the water, wire mesh nailed to them to funnel the fish into pens, where they were scooped out by skiffs or cannery operated boats called tenders. When the Alaska Legislature banned the fish traps as its first act after statehood in 1959, many former trap fishermen began using set nets, or nets anchored near shore to catch the salmon as they swam toward the rivers of their birth. By then the drift fleet had already been fishing the middle of Cook Inlet on boats for nearly five seasons.
The days of fish traps were days of self-sufficiency and hard work. In 1998, I interviewed several fishermen as part of my Master’s thesis, which was to collect an oral history of the Cook Inlet drift fleet. One surprise was getting to interview an old-timer named Nick Leman, a set-netter from Ninilchik, south of Kenai some 35 miles, who had fished on traps as a much younger man. Nick told me the following story while we sat over coffee and hot chocolate in the lobby of K-Mart in downtown Kenai: 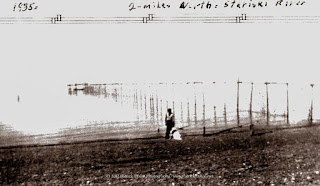 A fish trap on the shore of Cook Inlet, 1935, photo courtesy of Nick Leman

In the early morning twilight, 18-year-old Nick Leman pulled hard on his nine-foot oars to match his cousin’s strokes. The two young men were rowing their skiff in tandem to the outside end of Nick’s fish trap.  Two hours before high tide the Cook Inlet current was still running strong, and Nick and Bob did not want to lose ground. They were almost to the pot of the trap, 1,200 feet offshore, where they were going to attach one end of each of the four pipes they were carrying to the top of the trap and drop the other ends to the bottom. This would make their job of installing them easier in the morning when the tide was out. The big tides of early May and June were the times to build the traps in Cook Inlet. In 1936 Nick and his cousin Bob Resoff were younger and tougher than their fishing partners, and as a result they were the ones who did most of the grueling work. The pipes, made of steel two and one-half inches in diameter and 30 feet long, were used to guide the apron web to the bottom when the regulations required the trap to stop fishing.
Nick and Bob loaded the eighteen-foot wooden dory carefully, with the ends of the heavy pipes stuck in the bow and two pipes tied to each corner of the stern. The aft ends of the pipes hung well off the back of the boat.  The skiff was narrow and tippy, but it was all they had to work the trap. Gene Mason, skipper of the Westward, the cannery tender that picked up the fish and delivered supplies and mail, had brought the skiff from Seldovia for Nick to use for the summer on the Waterfall trap just south of Clam Gulch. During the season Bob worked the Porcupine trap, four and one-half miles to the north. The young men kept the skiff anchored offshore and used a small dinghy to reach it when it was time to work the trap. 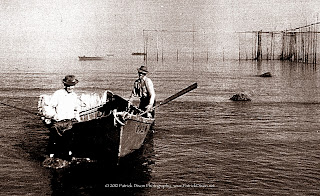 The incoming tide was bringing a swell to the waves, and the dory rode cleanly up and down them as 19-year-old Bob pulled at his set of oars. He watched the waves coming toward the stern of the boat. The force of each swell pushed the skiff toward the trap, swinging it to the side only to be quickly corrected by the strong backs and arms of Nick and Bob as they rowed. The distance to the outside edge of the trap closed rapidly until almost without warning they were upon it.
Guy wires stabilized each of the upright long spruce poles that stuck out of the water and created the framework of the trap. The poles, fastened to wooden or steel stakes driven into the mud and sand bottom, needed the extra support of the guy wires.  As the small skiff was lifted by a wave, the end of one of the pipes unexpectedly struck a wire. The force broke the rope holding two of the heavy steel pipes in place. The two pipes shifted suddenly to one side of the skiff, pushing Bob with them.  The skiff tipped severely and began to take on water.  Instantly, they knew they were in trouble. Both were wearing regular fishing garb: work clothes, jackets and boots - but no life jackets. They were sitting in a sinking skiff in over twenty feet of water, and Nick didn’t know how to swim. Fortunately for him the bow of the dory was touching the trap. He grabbed a pole and began climbing to the top of the trap. A cold wave surged up at him as he went, soaking his pants and boots with frigid Cook Inlet water. His cousin was in more serious trouble. His boots were stuck between the pipes.  The skiff tilted into the water as it filled, and the pressure of the pipes pinched Bob’s legs, threatening to drag him to the bottom when they rolled free.  Frantically he pulled his feet loose, scrambled out of the swamped skiff, and also clambered up a pole.
Posted by Patrick Dixon at 5:33 PM