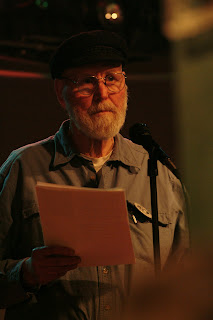 The Fisher Poets family lost one of its elder members yesterday. Harrison "Smitty" Smith of Long Beach, Washington, crossed the bar for the last time. A longtime fisherman and poet, Smitty was beloved by the Fisher Poet community and all who knew him. He had a wonderful way with words, and great sense of humor. He will be missed.

His wife, Lorrie Haight, sent this obituary to me yesterday. It's going in the Chinook Observer next Wednesday. I thought it would be appropriate to publish it here:

Harrison “Smitty” Smith, 86, of Long Beach, WA, passed away quietly on October 25,2012, at the Circle of Life, Adult Family Home in Long Beach, WA. Harrison was born on June 9, 1926, in Everett, WA, the son of Jack and Olga Smith of Lowell, WA. Olga taught remedial reading which young Smith picked up early and began earning favors from her by writing poems. Jack had been a commercial fisherman before marrying and shared his love of fishing with his son. Smitty’s grandfather, Jake Smith, taught him the art of blacksmithing at the age of four. This inspired him to learn how to create and fix anything. He loved to work with his hands and used all tools.


Young Smith attended Lowell Elementary School and Everett High School where his sense of humor charmed everyone he knew. He hated the name Harrison and was soon knows by all as Smitty. As a teenager, he took a job at a radio shop in Everett and developed a deep respect and understanding of electricity. He joined the Navy during WWII and trained in Special Devices. After attending college in Maryland on the GI Bill, he bought the radio shop in Everett where he had worked.
Smitty married his first wife, Beverly Rees in 1949 and raised two daughters, Sue Ellen and Luanne. He became a tech rep with the Philco Corporation which took him to various places in the States and to Okinawa, Japan.
While training airmen at the Naselle Air Station in the mid 50s, (now the Youth Camp) he reconnected with his lifelong love of fishing. On weekends he worked for Frank’s Tackle Box, the first charter office in Ilwaco, taking parties out in the Columbia River and the Pacific Ocean in search of salmon.
By 1965, he had his own troller and continued taking charters out of Ilwaco, then switched to commercial fishing. Smitty built a 43-foot troller, the “Sea Miner”, in 1970 and headed to Alaska. He became famous for giving technical help to troubled fishermen over the radio, solving problems from malfunctioning auto pilots to chasing cats out of hiding places. Since he had always been a poet, he often read his topical poems to the fleet during slow times. Many of them were published in the Alaska Fisherman’s Journal.
After a divorce in the late 70s, Smitty met Lorrie Haight in Pelican, AK. They shared a love of adventure, fished together and traveled extensively. In 1985, they began cruising the South Pacific for eight years in the “Akvavit”, a 53 foot, steel sailboat they built in Stanwood, WA.
After returning to the states, Harley-Davidson motorcycles became their next passion, and in 2000 they set off on a three-month, 12,000-mile camping trip across the northern States and Canada. The highlight was stopping in Sturgis, SD, during Bike Week to enjoy the company of 600,000 other biker fans. Other biking trips took them to Key West, FL, and Skagway, AK. Smitty also ran a small motorcycle repair shop at home in Long Beach, WA.
As one of their favorite poets, Smitty delighted audiences at the annual Fisher Poets Gathering in Astoria, OR, from its inception in 1998 through 2011. He published three books of poems, one of which is still in print.
Tragically, in September of 2004, while riding his Harley to Yuma, AZ, Smitty was struck by a pick-up truck in Southern California and fought for eight years to regain his health. Shortly after his 85th birthday, he came down with pneumonia and was finally transferred to hospice care at the Circle of Life.
He is survived by his first wife, Beverly (Rees, Smith) Beyeler of Yuma, AZ, their two daughters, Suzy (Smith) Johnson of Yuma AZ, Luanne (Smith, Tyson) Huebsch of Hillsboro, OR, two grandchildren, Luke Tyson and Katharine Sue (Tyson) Moran, two great-grandchildren and his wife of 32 years, Lorrie Haight of Long Beach, WA. There will be a memorial service sometime next summer. Smitty’s cremated remains will then be scattered in Alaska by his family. A bronze plaque with Smitty’s poem, “Mount Fairweather”, will be placed in Sitka, AK, his home fishing port. In leu of flowers, memorials my be made to the Harrison “Smitty” Smith memorial fund at Key Bank, PO Box 559, Long Beach, WA 98631, to assist with the plaque.

Here’s what it’s like on the Fairweather ground when the air is crisp and clear.
Fishing 40 miles offshore and the foothills disappear
Beneath the ocean surface, and all that’s left to show
Is a mountain range, clean and white: solid ice and snow.

Knife edged drifts and shadowed crags, the highest peak of all
Is mighty Mount Fairweather, fifteen thousand plus feet tall.
It’s looking o’er me in silence yet it seems to say,
“This is the place where you belong and this is where you’ll stay.”

I have no sense of distance could I extend my hand and seek
To feel the wispy vapor that crowns the lofty peak.
Or touch the sculptured snow fields and chasms bold abrupt,
Where sharp and stern, in black contrast, the jagged rocks erupt.

It’s hard to take my eyes away, but there are fish to be caught.
Can it be true this land was once for seven million bought?
Yet, I think this was too great a monetary fee,
‘Cause I’ve paid not a penny and it all belongs to me. 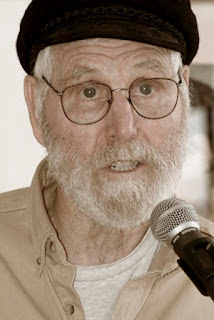 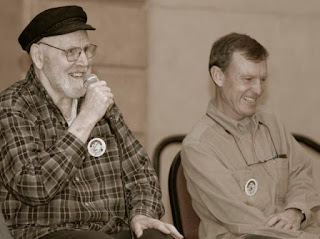 We love you, Smitty. May you have a smooth and following sea.
Posted by Patrick Dixon at 9:24 AM

I'm trying to get a hold of Lorrie. Lowell is 150 years old this year. We're doing a new book & would LOVE to quote some of his stories "Smitty's Stories, Growing up in Lowell." anything you could do to help me contact her would be greatly appreciated!

what a talented man. I'm proud to own his book "Smittys Stories, Groing up In Lowell, written by his wife. I actually got a hold of a kid he mentioned in the book. He's 99 years old & rode in our Lowell Days parade 8-10-13. Wish Smitty could of held on for the event. He would have loved every minute!!!