The Cards Do the Talking, Part 1

I have a memoir of fishing stories I have been writing on for some time now, but haven't figured out how to finish. Not sure I ever will, but thought I'd toss the pieces out there to see if anyone finds them entertaining. Plus, it's a great way to motivate myself to rewrite. I'll fire off installments as I reread and edit them. Hopefully that will mean posting on a more regular basis. As always, I am happy to receive your comments and feedback, including - especially - critiques. Let's shove off:

The Cards Do the Talking

I reorganized my office today. Rearranged the parts of my life I feel I can change. In the process, I knocked over a card holder, and scattered my stack of old fishing permit cards - each year a different color - from my 20 years fishing for salmon in Alaska’s Cook Inlet. A flurry of color left my desk like a bunch hits the net, all chaos and jumble, landing on the floor at my feet, each card holding a summer of history like permission to remember… 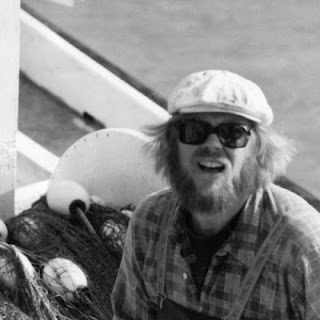 I pick up a white card from the top of the pile. It reads: “Commercial Fisheries Entry Commission PERMIT CARD. Salmon Drift CI.” In bold black letters, on the top right just under a hole punched in the plastic is printed “1980,” my first year as a skipper, after two years of crewing for an experienced Norwegian who had been at it since the mid-fifties.

My wife, Veronica, and I partner up with two totally inexperienced but equally enthusiastic friends to buy the permit and boat during the winter, and the purchase takes some creative financial scrambling. My partner and I scrape all the money together that we can to buy in, - I borrow $2,000 from my brother and add Veronica's Chevy Blazer to the deal just to get the permit. We pull it off, though, and the work starts. The boat we buy from the cannery is an old company boat with a wooden hull. Chris and I spend every available minute of time crawling around it as the engineers install the engine. We ask questions about the fuel system and how it works, the electrical system and how it works, the exhaust, the cooling system, the hydraulics, the water tanks the fuel tanks, the reel, the electronics, and on and on. It's a crash course in boat systems, and we drink it all in until we have just enough knowledge to be dangerous rather than effective when we break down.

Our boat, the Skookum Too was never designed to actually fish. It was a plug for making a fiberglass mold to lay up the hulls of 'real' boats. The planks have no corking, or padding to absorb water, between them like most seaworthy wooden boats do. The selling point for us, though, is a rebuilt Caterpillar diesel 3160 that the cannery is paying to have installed. The machinists who do the job call it a "school-bus engine." It seems a fitting machine for a schoolteacher-fisherman to use - a term I eventually discover is used to designate a class of fishermen who aren’t as good or as dedicated to fishing as full-timers. When I hear the term “teacher-fisherman” stage-whispered at mug-up about me, I silently vow to become a better fisherman than the asshole who mutters it loud enough for me to hear. I know him. On land, he’s a blowhard. I doubt if he’s much different at sea. Still, not knowing what we are doing, we eventually go fishing, throw out the gear and... take naps. When we make a set on the big day and take the entire 12-hour period to pick 800 fish while the rest of the guys we know, including the asshole, come in with 1,600 or more, we figure we are doing something wrong. We just don’t know what it is. 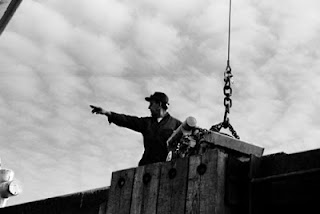 Machinist Jim Peterson directing the crane
lifting our engine to the boat from the dock.

But before we get to have that experience, after all the boat work we are excited to just get to the fishing. When the Skookum is finally in the water after months of preparation and work, when the engine finally starts, after all the web has been mended by Veronica’s and Gigi’s inexperienced hands, after all the groceries and gear has been bought (but not paid for) and stowed aboard, we go to the cannery expecting to leave the river with the fleet only to find out from a gathering of fishermen at mug-up that we are on strike. Shit.

How's that for starters? More soon. Let me know what you think!
- Pat
Posted by Patrick Dixon at 11:03 AM