The Cards Do the Talking, Part 2

Here is the next installment. I'm going to try and keep these at 500 words or so, so you don't feel overwhelmed with the reading. There is a tense change here - from present to past. Which do you like better? Let me know...

We were stunned. What does this mean? We asked. Who is on strike? Everyone? We found it hard to believe that every boat in the Inlet, over 700 of them, were all in agreement to do this. We were teachers, for Chrissakes! We’d never experienced a group of teachers agreeing to do something like this. They couldn’t even agree on what made a student tardy rather than absent. Shit.
We asked ourselves WHY are we striking? For a better price? Why? What’s wrong with the price we have? We had no knowledge of markets, of expenses vs earnings, of price-fixing or what was fair or not. All we had experienced since the decision to get involved in fishing was the hard work. Now we had to deal with politics???  “Bullshit. Let’s just go fishing,” we argued to ourselves, “Let these guys work out this crap. We need to figure out how to catch fish.” Plus, we reasoned, we’ve got a ton of debt to recover. Our expenses were overwhelming. “We can’t afford to sit at the dock and wait for the processors to come to us. We need to start making money NOW!”
I was a teacher before I fished. I knew intellectually that breaking a strike was the wrong thing to do. It had always been a no-brainer to me that if a teacher strike were voted, to be an effective tool everyone needed to participate. My confusion in the matter wasn’t about my belief in supporting a strike. The problem I had was that I didn’t see myself as a fisherman. I bought a permit and a boat; I worked as hard as anyone I saw to get ready for the season; but I still hadn’t fished a day in my life other than as a deckhand; I hadn’t yet earned the right to be a card-carrying member of the club. No one had shown me the secret handshake. I supposed I’d merit it eventually, but until then, I was just a “teacher who fished.” The concerns of the fishermen weren’t my concerns, really, were they? If I went fishing while the rest of the guys were on the beach, how could my small effort create a problem for all these other professionals?
But the other fishermen around the cannery who saw us as green and dumb made it a point to talk about strikebreakers when we were around. As the first scheduled fishing period loomed, they mentioned guys who had gone fishing during the last strike, in less than complimentary terms. Though the stories weren’t clear or complete, we started listening more attentively. They were speaking about us, to us, without ever actually mentioning our names. 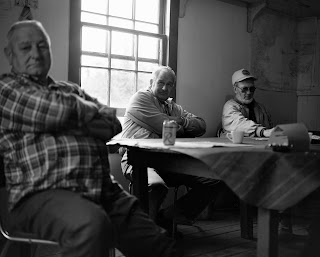 In the fishermen's bunkhouse, CWF, Kenai.
Posted by Patrick Dixon at 9:31 AM

I never thought of fisherman going on strike. The environmentalist in me thought, "Good! Give the fish a break once in a while." I wonder what would happen if seafood was no longer readily available. More bad fish farms probably.
I like your retrospect about how you didn't identify yourself as a fisherman and why that made your feelings different.

Cowboy on the Side said...